Around Clapham Common on a cold Saturday

After having spent Saturday morning at home keeping warm, I decided to go out and brace the cold. The little one was happy in the buggy being pushed around so he didn’t mind as long as we kept moving. So I went on a little tour of the area.

I had not seen this building and the arches before. You can see the small snow flakes that were coming down very lightly.

This was new too, an empty building which looked like an academy built in the latin style. It is in fact at the back of a catholic school, so perhaps it has something to do with it.

It wasn’t too long before we ended up in the park looking at the seagulls.

And the ducks… Little one is going through a phase of imitating the sounds of animals and the ducks are big favourites.

The sun made an appearance and I hurried to take a few snaps to catch the light.

I felt brave enough to go in the skateboarding enclosure. With the buggy it was easier and the little one was very interested.

A skater having some coffee. 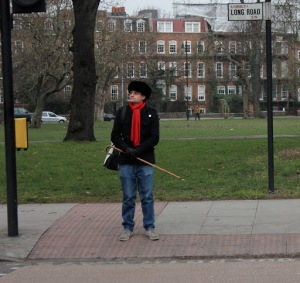 A man with an interesting look that noticed my camera and turned his head slightly to the side. I nodded as a way to say thank you for allowing me to take a picture.

By the end of the walk my hands were frozen and I had used all the snacks I had in the bag. So we called it a day.