This post and the photos are from the Albanian Independence Day, which is on 28 November 1912. Albania became independent later than its Balkan neighbours who declared their independence from the Ottoman Empire at the end of the previous century. The territory of Albania was never recognised as a “single-unit” under any of the long empires that were dominant in the area in he previous centuries (Ottoman, Byzantine or Roman). Where as its people were easily identifiable as Albanians.

At the time of the fall of the Ottoman Empire the territory of Albania suffered but at least its people achieved to declare themselves independent. The border took another 8 years to be defined and the process was completed in 1920.

In actual fact Albania lost significant territory in the south to Greece, east to Macedonia, north to Montenegro and all of Kosovo, to Serbia.

That is why as weird as this may be, Albania is a country that is surrounded by the same Albanian population on all of its borders.

So this year was Albania’s 101 year of being independent from the Ottoman Empire. Albanians celebrate this important national day quite pompously in Albania and in different ways in other countries where Albanian communities live.

The Albanian community in London organised many celebrations, lead by the different community groups such as Shpresa programme, Nene Teresa, Ardhmeria etc. The one we went to was organised by Ardhmeria in collaboration with the Albanian ambassador in the UK. The author of a book about the war in Kosovo was also invited and presented his book ‘Flying with kites’ which can be bought on amazon for those wanting to learn more about the conflict.

And finally the photos I took of beautiful Albanians that live in London wearing Albanian traditional costumes but also of other people attending the celebrations. 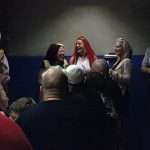 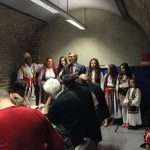